There’s a new level of peculiarity that comes with Bluey appreciation: you’re at a BBQ with other parents and all of you – ALL OF YOU – are talking about a kids’ show. Not in the “oh it’s just so educational” or “it actually has a good theme song” kind of way, no, you are talking about Bluey because YOU love it. You all admit to watching it without your children there. One of you even confesses to sending a message to your elderly neighbour, just to let her know about it.

Bluey is a 6 year old Blue Heeler and the animated show follows her daily play with her younger sister Bingo and her Dad, Bandit. Her mother, Chilli, often appears just to say that she is heading off to work, to play hockey, or to go for a run. The family live in a Queenslander surrounded by the sounds and sights of the tropics.

What makes Bluey so amazing?

Whilst I love every single 7 minute episode of Bluey created, I am eagerly awaiting Season 2, or a Bluey movie. For the moment, when my daughter demands an episode for the 700th time (usually Markets), I have an arsenal of play ideas at my disposal. “I have a balloon we could blow up – how about a game of Keepy Uppy?” “No,” she says, “How about… Shadowlands?” 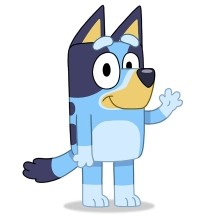